ENERGY
As we begin our study of basic hydraulics we must first recognize that fluid power is another method of transferring energy. This energy transfer is from a prime mover or input power source, to an actuator or output device. This means of energy transfer, although not always the most efficient, where properly applied may provide optimum work control. Energy is defined as the ability to do work.

WORK
Work is defined as force through a distance. If 1000 pounds is moved a distance of 2 feet, work has been accomplished. Work is measured in foot-pounds.

POWER
Power is defined as the rate of doing work, or work over time. In order to have relative meaning for measuring power, power must be converted to horsepower, which is a unit of measuring energy

Hydraulic HP = Flow (gpm) x Pressure (psi)/ 1714 (constant)
In Figure 1. 3 , a 10,000 pound weight is being lifted a distance of 1 foot. If the load is lifted in 2 seconds, a power requirement is defined. This may be expressed as hydraulic horsepower. To lift 10,000 pounds a distance of 1 foot in 2 seconds, there must be a required flow rate at a specific pressure, based on cylinder size and the pump flow discharge.

HEAT
The law of conservation of energy states that energy can neither be created nor destroyed, although it can change its form. Energy in a hydraulic system that is not used for work takes the form of heat.

TORQUE
Torque is twisting force. Mathematically, torque is defined as force times a moment arm and is
measured in foot-pounds. The moment arm is the distance from the object on which the force is being applied to the actual force itself.

Torque = Force x Moment Arm
This same theory applies to hydraulic motors. Hydraulic motors are actuators that are rated in specific torque values at a given pressure. The twisting force, or torque, is the generated work. A motor’s rotation per minute (rpm) at a given torque specifies our energy usage or horsepower requirement. 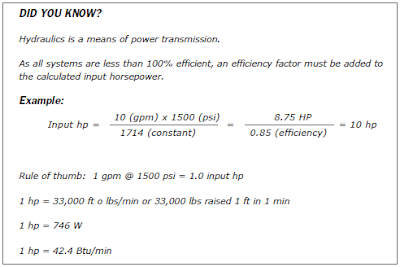 PRESSURE
Pressure in a hydraulic system comes from resistance to flow. To further illustrate this principle, consider the flow produced from the hydraulic pump in Figure 1.7. The pump is producing flow, not pressure. However, as flow from the pump is restricted, pressure will result. This resistance to flow is load induced from the actuator and also generated as the fluid is passed through the various conductors and components. All points of resistance, such as long runs of pipe, elbows, and various components, are accumulative in series and contribute to total system pressure.
Pascal’s law forms the basis for understanding the relationship between force, pressure, and area. The relationship is often expressed with the symbol in Figure 1.8.
Mathematically we express this relationship as: Force is equal to pressure times area; pressure is equal to force divided by area; and area can be calculated by dividing force by pressure.

Pascal’s law is expressed as follows: Pressure applied on a confined fluid at rest is transmitted undiminished in all directions and acts with equal force on equal areas and at right angles to them.

LOAD-INDUCED PRESSURE
Load-induced pressure is defined as pressure generated from the load, or force on the actuator. The effective area of the cylinder piston is the area available for force generation. In Figure 1.10, a 10,000 pound force gives a load-induced pressure of 1,000 psi, based on the formula. When the cylinder is extended, the required pressure to move the 10,000 pound load is 1,000 psi less frictional forces.
During retraction, the effective area is only 5 square inches. This increases the required pressure to 2,000 psi needed to retract the load.

FLUIDS
The study of fluid power deals with understanding energy transmission through a confined liquid. The hydraulic fluid may well be considered the most important component in a hydraulic system. It serves as lubricant, heat transfer medium, a means of transferring energy, and a sealant.
Hydraulic fluid is basically non-compressible and can take the shape of any container. Because of this, it exhibits a certain advantage in the transmission of force. Figure 1.13 is an example where the fluid will take the shape of a container. Using a positive displacement pump energy is transmitted from the prime mover (input source) to the actuator (output) through the medium of a non-compressible fluid. As the fluid passes through the conductors and components, certain considerations must be given to ensure maximum efficiency of energy transfer. These considerations include the understanding and proper application of fluid velocity and viscosity.

VELOCITY
Velocity is the distance fluid travels per unit of time. With a fixed volume of fluid going through a
conductor, the velocity of the fluid will depend on the inside diameter of the conductor.

If the diameter of a conductor is increased, the velocity of the fluid will decrease. Conversely, if the diameter of the conductor is decreased, the fluid’s velocity will increase.
To better illustrate this principle two simple systems are shown in Figure 1.15, in which two pumps of equal 30-gpm displacement move fluid through conductors of different sizes. The displacement
remains equal while the velocity of the fluid varies with the size of the conductor. The fluid turning fly wheel 2 is moving 4 times faster than the fluid turning fly wheel 1 because the inside diameter of the pipe for fly wheel 1 is twice the size of the inside diameter of fly wheel 2. However, the flywheels turn at the same rate because the volume displacement is equal in both systems. 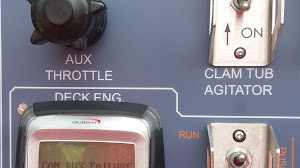